How Fast Can You Go On A Bike? All You need to know 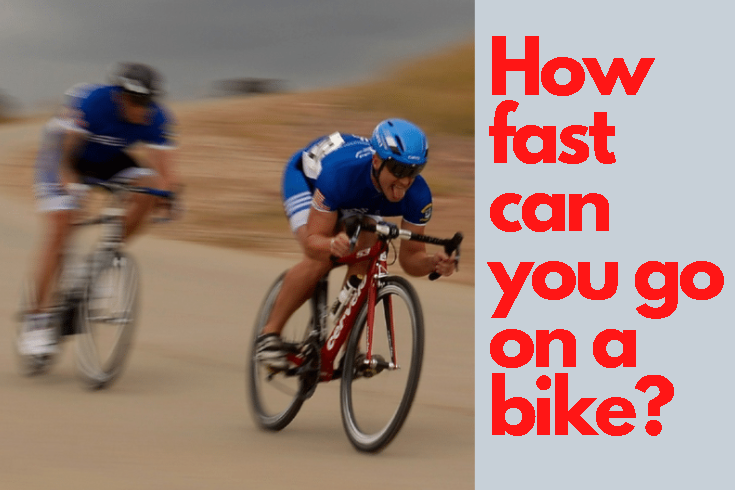 The average speed of a bike is not that fast. But you are here because you want to go faster, much faster! Will you be able to reach the top speed of your bike? Who knows, only one way to find out and that is by checking out this blog about how fast can you go on a bike.

How fast can you go on a bike?

The maximum speed at which you can travel on a bicycle is affected by many factors. A person who is fit and rides every day will be able to go faster than someone who is out of shape or a beginner. In addition, the type of bike you have and your position on it plays a role.

The average speed that a person can power their bicycle is between 10 and 15 miles per hour. There are several factors that determine how fast you can go on a bike. These factors include weight, wind resistance, incline, aerodynamics and the surface of the road.

The faster you want to go, the more effort it will take. Therefore, if your goal is to go as fast as possible, prepare for an all-out effort.

There are three main categories of bikes: road bikes, mountain bikes, and electric bikes. Each category has a different set of factors that determine how fast it can go.

Road bikes are designed to go as fast as possible on paved roads. They have skinny tires and are built with lightweight materials like carbon fiber and aluminum. Some road bikes have disc brakes instead of rim brakes, which allows them to go even faster by decreasing the weight of the wheel. A good road bike will have a top speed of around 35 mph (56 km/h). This is one of the fastest types of bike.

Mountain bikes are designed for off-road cycling on rugged terrain like dirt trails and rocky paths. These bikes have wider tires with more tread than road bikes, which allows them to grip the ground better when riding on unpaved roads. Most mountain bike tires have a top speed limit between 20 mph (32 km/h) and 25 mph (40 km/h). This is because their tires generate more rolling resistance when traveling at high speeds on paved roads.

The fastest electric bike in the word is the Top 3.0. This bike is able to get up to speeds of 50 mph.

Next up is the Stealth Bomber electric bike. This bike is able to go faster than most bikes on the road at speeds of 35-45 mph.

The third fastest electric bike is the Sondors X. This electric bike has a top speed of 35 mph and can travel 80 miles on just one single charge.

The fourth fastest electric bike is the Bultaco Brinco R, which has a top speed of 32 mph and can travel up to 50 miles on just one single charge.

How To Make Your Bike Go Faster

There are plenty of ways to make your bike faster. You can tune up your bike and make sure it's in good condition. You can also upgrade parts or buy new accessories to make it faster.

Here are simple ways to make your bike go faster

If you have an old bicycle that weighs thirty pounds and has one-speed gearing, it will be a lot harder to make it go fast than if you had a modern, lightweight bicycle with twenty-one speeds. If you’re seriously interested in going faster, consider upgrading your ride.

Are you wondering whether or not to upgrade your existing bike? The first thing to check is the weight of the bike. If it weighs less than twenty pounds, it might be worth keeping as is without spending too much money on upgrades. Lightweight carbon-fiber bikes are very expensive, so if you already own a relatively lightweight model and aren’t carrying around extra weight, try making some of the improvements listed below before rushing out to buy a new bike.

Are your brakes rickety and squeaky? Do your gears slip and grind when you shift? How about your tires—are they worn through at the treads?

Speed is the result of power and aerodynamics. You want to increase both, but if you’re just starting out, power is your best bet. Speed comes from either strength or endurance. It’s like lifting weights: The more weight you can lift (power), the more reps you can do (endurance). Here are a few things you can do to increase speed:

If your bike doesn’t fit properly, you will never be able to maximize your power output. Even a few degrees of difference in saddle height or handlebar height can have a big effect on how efficiently you pedal.

Endurance work won’t do much for you if you aren’t fully recovered between rides. It’s better to ride three days per week fully rested than five days per week tired and overtrained.

Intervals are short periods of high-intensity work separated by longer rest periods. For instance, a simple one is 30 seconds hard, two minutes easy repeated 10 times. Intervals train the body to recover after hard efforts and improve the efficiency of your cardiovascular system so that it delivers more oxygen to your muscles.

Speed of a bike is measured in one of two ways: miles per hour, or kilometers per hour. Sometimes speed is measured by how many times the wheels turn through one rotation in a minute. This is called rotations per minute (rpm). Of course, most people probably won't care how fast they can go on their bikes because real-world bikes can go faster than you can. If you want to race you will need a motor to travel fast.

Hopefully this article has helped you to gain a full grasp of how fast bikes can go. If you ever need a reminder, please come back and give this article a read. Maybe it will help you in the future.