What is an endurance bike | Full Guide 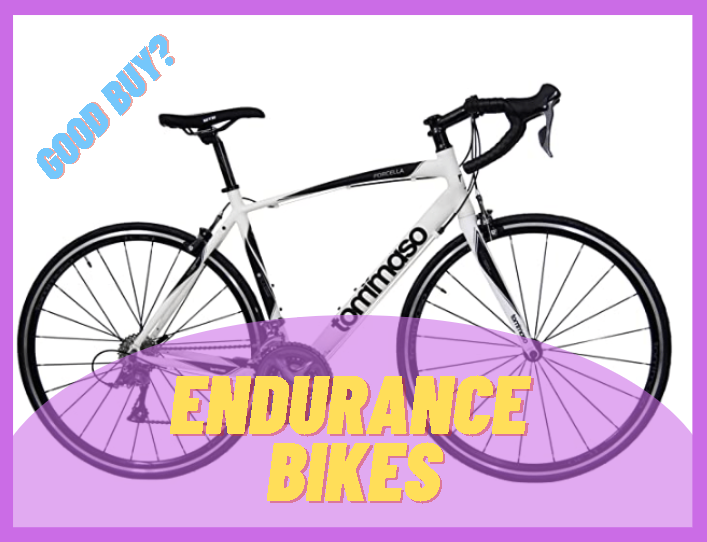 Endurance bikes accommodate wider tires. Endurance bikes have a lower bottom bracket. This means the pedals are closer to the ground, which gives the rider more control on rough roads and over bumpy terrain. Endurance bikes have more relaxed geometry than their racing counterparts. They put the rider in a less aggressive position, which is ideal for long days in the saddle or gravel racing where you may encounter rocks, sand and other obstacles in your path. Wider tires are one of several features that make endurance bikes better suited to rougher terrain like gravel or mountain biking trails than traditional road bike frames (which tend to have narrower handlebars). Endurance frames also feature slightly taller head tubes so you can ride with less strain on your neck muscles--another nice touch when tackling unfamiliar territory from time to time.

If you want a good starter endurance bike, i would suggest Tommaso Monza Endurance Aluminum Road Bike. The price point of this bike is amazing for what you get and has many good reviews on amazon.

Endurance bikes are designed for comfort, not speed.

An endurance bike will have the following features that make it comfortable:

However, all these features shift your weight forward so the front wheel can become a little skittier than on other bikes when riding over rough surfaces. You'll also find it harder to get out of the saddle when climbing hills as you're further forwards on the bike – although this can also help with balance.

As the name suggests, endurance bikes are designed to make you more comfortable over longer distances. They achieve this with a more relaxed frame geometry. In general, an endurance bike has a shorter top tube and higher head tube than a standard road bike (for comfort), a longer wheelbase and lower bottom bracket (for stability), and longer chainstays (to keep your weight back over the rear wheel). An endurance bike also has a slacker head tube angle than a standard road bike which contributes to its handling neutrality.

The combination of these features results in an upright riding position that puts less strain on your neck and shoulders and helps prevent numbness in your hands. Endurance bikes can absorb rough roads better than race bikes and their quick but stable steering makes them easy to handle at low speeds.

What are endurance bikes used for?

Endurance bikes are the most versatile of all road bike types. You can ride them on the pavement, gravel roads, or even trails. With their stable geometry and wider tires, you will feel more confident on your bike, which means you can go longer and faster than with a traditional road bike.

These bikes also have more relaxed head tube angles and shorter wheelbases, which means that they are easier to control at slower speeds.

What is the difference between a race bike and an endurance bike?

In the most basic terms, the major difference between a race bike and an endurance bike is comfort. With their more relaxed geometry and slightly taller head tube, endurance bikes position the rider in a way that puts less stress on the back muscles. This allows for longer rides with fewer aches and pains.

A race bike is stiffer and more aerodynamic, but it also has a more aggressive geometry and places riders in an uncomfortable forward-leaning position that can be tiring over long distances. It’s also worth noting that because of this more forward position, race bikes tend to have shorter wheelbases than their endurance counterparts, giving them significantly sharper steering. This makes them ideal for racing or quickly navigating crowded city streets where you’re constantly making sharp turns around corners or swerving to avoid potholes. However, such handling is not as comfortable on flat paved trails or hilly country roads where you spend long hours in one direction with your hands gripping the same spot on your handlebars.

While all types, road bikes, mountain bikes, electric bikes, can technically be raced (and many are), only road cyclists consider “racing” versus “not racing” when comparing different models of road bike. Mountain bikers don't make this distinction when considering hardtail versus full suspension frames; hybrids don't differentiate between urban commuters and weekend cruisers; recreational e-bike riders don't compare pedal assist versus throttle control systems based on whether they intend to use their e-bikes for recreation or transportation.

What are the benefits of endurance biking?

The benefits of an endurance bike are simple: they're more comfortable to ride. The geometry of an endurance bike is designed specifically to help you ride longer distances and keep you comfortable while doing so. This makes them the better option if you're looking for a long-distance commuter or a touring bike, as opposed to a race bike. Endurance bikes also tend to be more stable, which is a great option for newer riders who haven't fully honed their cycling skills yet. They can also handle well on gravel and other rough roads because they tend to favor stability over speed.

No, endurance bikes are not fast. In fact, they’re designed for comfort and durability rather than speed. Because of the relaxed frame geometry and slightly heavier weight when compared to race bikes, they can be a touch slower in acceleration than their purebred competition-focused cousins. That said, most endurance bikes still offer plenty of low gears that allow riders to get up even the steepest terrain with some effort.

In terms of outright speed, however, these bikes aren’t great for road racing. If you plan on participating in high-octane criteriums or other road races where shaving off every last second is paramount (and where sacrificing comfort for speed makes sense), it’s best to look elsewhere for a bike that will better suit your needs.

f you're new to cycling, or are making your way back onto the bike after a long time away, there's no shame in admitting that you'd rather not spend your next ride bent over like a pro racer. Endurance bikes let you sit up right and have a more comfortable ride. They'll have taller head tubes and shorter top tubes than race bikes; they'll also tend to have shorter stems and wider handlebars. It's not just about comfort though: endurance road bikes are capable machines that can perform well on all sorts of terrain. And at the right price point, an endurance bike might do something else: tempt you into upgrading components down the line!

Can endurance bikes go on gravel?

Yes, with the proper tires. Endurance bikes have wider tires than a traditional road bike, but not as wide as a gravel bike. Customers who purchase an endurance bike from us should expect to ride on pavement, on dirt roads, and even on well-maintained gravel paths. We recommend that riders choose their tire width depending on where they plan to ride most often. A large part of this is personal preference; some people like a more comfortable ride; others want something sportier and stiffer. If you want to be able to use your endurance bike for both long rides on pavement and shorter jaunts off road, we recommend 32mm tires or larger (up to 45mm).

While it's great to see the gravel bike market grow, and of course we love racing our gravel bikes in endurance races, they're not the best option for everyone. Those who are interested in racing or riding mainly on pavement will get the most out of an endurance-focused bike. The lower weight, stiffness and aggressive geometry will give these riders a more efficient ride than a gravel bike would.

For those that have been riding for a while and want to focus more on long days in the saddle with a mix of terrain, an endurance bike is what you need. It's also true that you can race cyclocross on an endurance-focused frame if you're so inclined. Endurance bikes also tend to be less expensive than their more versatile counterparts.

If you plan to spend most of your time on dirt roads or tackling other rough terrain (or any time at all), then it's recommended that you look into a gravel bike instead. These are built with bigger tires and disc brakes, making them better equipped to handle everything from mud bogs to descents down loose fire roads or poorly maintained pavement. They're generally heavier than endurance bikes because of their added durability, but they make up for this by offering comfort features like longer wheelbases and relaxed head tube angles that make all-day adventures that much easier, whereas an aggressive position is sometimes necessary when racing against competitors on smooth courses in shorter events like crits or road races.

Endurance bikes are more about comfort and balanced handling, while mountain bikes are built to handle the roughest trails you can throw at them.

Mountain bikes have wide, knobby tires that provide ample traction on gravel and dirt paths. They also feature a suspension system that smooths out bumps, which increases control and comfort on rough terrain. Mountain bike gearing is designed for climbing steep grades, the reverse of road biking, where the emphasis is on higher speeds and faster cadence (pedal revolutions). The gearing and additional weight of a mountain bike make it slower than an endurance bike on smoother surfaces.

If speed is your thing, the endurance bike should be your go-to. It’s faster than its mountain biking cousin, with narrower tires for less rolling resistance and slightly lighter weight for easier acceleration (more so if you choose a carbon frame model). However, because it sacrifices some control features in order to save weight and increase speed, it’s not as adept as a mountain bike at handling rougher terrain.

Thank you for making it this far into the article, you just learned everything you need to know about endurance bikes and their various features.

There are a number of endurance bikes on the market, each one with its own unique features and characteristics. Endurance biking is one sport that has been gaining popularity in the last ten years, so you can bet that more and more models will be coming to aid cyclists.