⇨ What Does an Inverter Do in an RV?

What Does an Inverter Do in an RV? 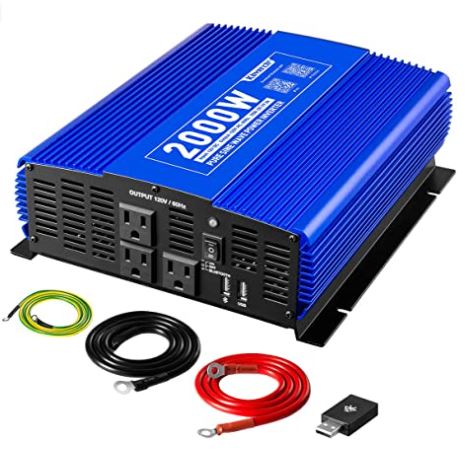 An inverter's main job is to take 12-volts DC that is supplied by your rv's battery and turn it into 120-volts AC. Rv inverters are used in most rv appliances.

An inverter is connected to your battery system and will provide 120 volts AC power to the electrical components in your RV. This allows you to run AC powered equipment on DC 12 volt batteries while at an RV park or campground hook-up.

It also lets you use regular household appliances that require more than 12 volts, such as TVs, DVD players and game consoles. That means you can watch TV even when you're not plugged into a campsite. However, many RVs come with some devices prewired for shore power (AC) so they will work without any modifications.

The type of inverter that works for most people are small, about the size of a notebook. You can use your inverter for smaller devices like phones, tablets and laptops while driving down the road since they come with a USB port built-in.

If you want power for larger appliances like a microwave or refrigerator , get one that has an automatic generator start feature so it will automatically turn on once engine power from your RV's alternator is detected. Then when you shut off the engine, the inverter shuts off as well.

This means that if you're plugged into shore power at an RV park but have not turned on your inverter yet, then start up your vehicle to move around while still connected to electric hookups, it won't drain batteries. The AC outlets in the RV will still work.

A good quality inverter should stay cool to the touch and have a low temperature shut off, in case you accidentally leave something on all night long.

There are several other great features that can be built into an rv inverter, such as automatic voltage regulation (AVR), but for the most part these extra features aren't available on inexpensive models or for large power ratings. Some units include a USB port which allows you to charge mobile electronic devices like computers and cell phones while running the unit.

Although they may cost more initially, having a high wattage capacity means that you can use it to run several appliances at once, making your camping experience easier without worrying too much power usage when everything is on.

Benefits of owning an inverter

Perhaps one of the biggest benefits of owning an inverter is that you can run your electronic appliances without worrying about draining the battery. Even if you're not using a window air conditioner, these units will keep power running to every appliance in your RV.

Inverters are super convenient even if you don't have a lot of high wattage appliances. If you want to start up the coffee maker on a cool morning and your batteries aren't charged yet, it's easy to connect an inverter in order to get started with no problem.

Rv inverters allows everyone to use certain appliances that they wouldn't be able to by just running on rv power.

What is Alternating Current (AC)?

What is Direct Current (DC)?

Direct current is what your batteries produce when they are being charged or run an appliance directly, such as the fan above your head. Unlike alternating current, direct current stays at the same voltage until it completely runs out and turns off. Instead of shifting back and forth from positive to negative like an alternating current does, direct current maintains one polarity constantly--positive (+). Direct current usually ranges between 12 to 15 volts depending on battery size and charging status of the battery bank.

An inverter will convert dc power into ac power so that you can use your household appliances in your rv without plugging them into the wall. Alternating currents wave pattern / frequency is 50 cycles per second, or 50Hz.

What is a converter?

A converter's job is to change AC current to DC current. It does the exact opposite of what a inverter does. It takes the AC electricity coming from regular sockets or anything that outputs 120-volts and changes it into DC so that you can use your 12-volt systems.

Which is better? Converters vs Inverters

There are certain situations wherein each of these type of electronics can come in handy. However, with an rv, an inverter will more than likely be the better choice as there will hardly be a time when you will need to convert 120-volts to 12-volts. This is due to the fact that most RV appliances already run on 12V.

Rv inverters are available in many different power ranges. There are some small ones that can output 700 watts or less and there are some that can output over 5000 watts. It is always best to double check the power ratings of your RV appliances. If you intend on using more than what a certain inverter can handle, it would be best to upgrade or purchase an additional inverter for those appliances or better yet just buy an rv inverter that is able to handle all appliances at the same time.

The installation process will depend on the type of inverter you have purchased and also where you are going to install it in your rv. Almost all types of inverters come with a remote switch which allows easy access from anywhere within your rv. This provides convenience when changing modes so that you do not need to worry about actually having to reach the device itself whenever you need to change modes.

Although inverters come in different shapes and sizes, they all work similarly and do the same thing which is converting the voltage produced by your rv's batteries or generator source into AC power that can be used for any appliances within your rv. You should note that when you connect an appliance directly to a battery, it will always receive DC power but this type of power cannot be used with most appliances since it does not have the proper voltage needed. Appliances like laptops require 120-volt AC power while others like televisions or fans may require more voltage depending on what sort of model you are using.

Most RVs use an inverter that has two outputs, one with 120-volt AC power while the other is usually just a standard 12-volt DC output like what your batteries already provide. The main advantage of having a dual output is so that you can utilize both types of appliances whenever needed without having to move them around.

What can rv inverters power?

Rv inverters are able to power almost any appliance you have depending on the size and power output of you inverter.

Most appliances that have a standard 12-volt plug on the end of your cord can be connected directly to an inverter without needing any further power source.

Any appliance with a 120-volt plug running at a certain wattage will be able to run on an rv inverter. You do not need to worry about voltage requirements for this type of equipment.

Remember that you must use power sparingly when utilizing your inverter since it is meant only for emergencies or occasional usage.

Here a list of some common appliances that you can use with an inverter:

Things to consider when purchasing a inverter

There are many different things you need to consider when purchasing an inverter. Some of the most important issues are budget, power retention and usage.

If you plan on using a lot of heavy appliances with your inverter, then you should have plenty of money set aside for it because bigger ones can get quite costly. Power retention is also important; otherwise, your appliances will not last very long at all if they are repeatedly turned off and on again by switching from inverter power to regular power, which draws down the life of everything that is plugged into it. Another thing to think hard about is how the inverters in different sizes compare to one another.

The size of the inverter will usually determine how much watts it can provide at any given time. Watts are what measure the amount of power that an inverter can provide to different appliances. A bigger inverter will be able to carry more watts and therefore can run larger things, such as televisions, a fridge, or an air conditioner. If you have a smaller inverter, it will be limited to powering smaller items.

Inverters can cost as low as $15 all the way up to over $1000. Inverter prices vary depending on the size of the inverter. Generally, the larger the inverter, the higher the price. The next thing to think about when purchasing an inverter is whether you want pure sine wave power or modified sine wave power.

Pure sine wave inverters produce cleaner and more stable power and can be used with anything that requires electricity from an outlet at home like hair dryers, blenders microwaves. For this reason, you need to pay more for pure sine wave power inverters but they will save you money in the long run because your equipment won't be damaged by using a modified sine wave power source.

The best choice is to get an inverter that has both options, so it won't matter what kind of power source you are hooked up to, you can still use all your appliances.

With so many different things to consider, it can be tough to know where to start. That's why I've compiled a list of the most important issues you should factor into your decision-making process when purchasing an inverter. Some of these include budget and power retention. To find out more about all the details behind this complicated purchase, just contact me through email with any questions or concerns.