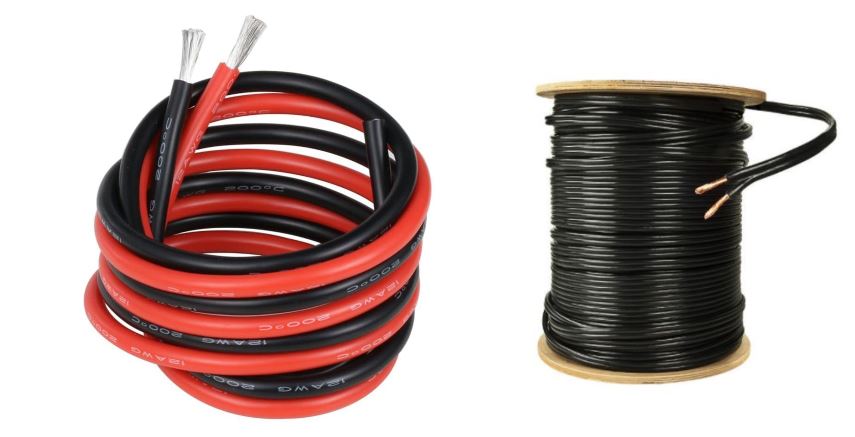 What size wire for 20 amps?

This 100 feet 12 AWG wire from amazon is able to handle 600 volts. Any product you plan on buying should have the features listed below.

Flame retardancy is a critical requirement for any electrical product. This is especially true for products that are placed outdoors where they may come into contact with fire. In order to meet this requirement, the jacket should have a high level of flame retardancy.

Moisture can cause many problems for electrical equipment. If water gets inside the insulation, it can short out the circuit and cause damage to the device. To prevent this from happening, the jacket should be able to resist moisture penetration.

Corrosion is the result of chemical reactions between two materials. When these chemicals react together, they form a solid material that is attached to the surface of the metal. This can lead to the destruction of the wire and ultimately the entire system. To prevent this from occurring, the jacket should be made of materials that are not susceptible to corrosion.

What is the ampacity?

The ampacity of a conductor is defined as how much current can safely be carried by it without overheating. The maximum current that can flow through a circuit element or conductor must not exceed its ampacity. For example, if a piece of 12 AWG copper has an ampacity of 20 amps, this means that we cannot send more than 20 amps through it without overheating and melting down the wiring. If we force more than 20 amps through this wire (for example, 50 amps), then it will result in overheating and eventually cause fire or electric shock.

Be sure to find out the correct wire you need for any job you plan on completing.

A 20 amp breaker requires a wire size of 12 AWG. This is the smallest wire size you should use for a 20 amp circuit breaker since an AWG gauge of 12 represents 20 amps. If you plan on installing a 20 amp receptacle in your home, then remember that this requires a special 20 amp outlet box, which has to have an opening sufficient enough for the large cable that would lead from the breaker panel to the receptacle.

Do not mix wires!

NEVER use 14-gauge or 16-gauge wire for 20 amp breakers when sized with a No. 12 AWG wire. If you run out of No. 12 AWG wire, go and purchase some more and do not try to use any leftover wires from any other projects you might have completed earlier.

What is voltage drop?

Voltage drop is defined as the decrease in the voltage level (in volts) that occurs when current is passing through a resistance. To avoid voltage drop, you should always buy sufficient wire size so that the voltage does not drop below 85 percent of its nominal value.

Another way to avoid voltage drop is by using as much No. 12 AWG copper wire as you can afford, because it has very little resistance per foot in comparison with many other lower gauge wires.

The total current (in amps) for all loads connected to a given breaker cannot exceed 85% of the rating on that breaker; if it exceeds this level, then the number of breakers or fuses should be increased accordingly. Also, any single receptacle/outlet or combination thereof cannot handle more than 20% of the branch circuit's rated capacity. For example, if your main panel is rated at 100A, then no single receptacle (or outlet) or combination of multiple receptacles/outlets can be rated for more than 20A.

However, many other variables are involved in proper circuit wiring. For instance, a given wire's ampacity rating assumes that it is protected by a fuse or circuit breaker of adequate rating; if either of these devices are undersized, the total current can exceed 85% of their ratings and cause overheating or even meltdowns. In addition, there are certain factors that reduce allowable ampacity such as exposure to moisture or sunlight and the length of wires in relation to temperature in those areas.

An extension cord that comes in at a very low cost and will definitely do the job. Pick one of these up over at amazon.

This 20 amp extension cord will be sure to handle all those 20 amp job requirements you might throw at it. Jump over to amazon to pick some up.

No, this should never be done as 14 gauge wire is too thin to carry 20 amps in a home.

It is not recommended that you install 14 gauge wire in your home unless it is going to be used for light bulbs and other small appliances. If these two types of conductors are installed together, then there will be a very high risk that the circuit will overheat or spark during a short. You should never mix wires of different gauges. It is always best to choose the exact gauge of wire that you need for a circuit in order to avoid any kind of problems.

AWG is the American Wire Gauge or the system of standard wire sizes in use in the USA. The smaller the number, the larger the diameter of the wire. Sometimes called "the American Standard" to avoid confusion with British Standard wire gauge (SWG) used outside North America.

How Many Outlets Can Be Placed on a 20 Amp Circuit (Household)?

A 20 amp circuit can easily handle almost any amount of outlets you place on it as long as you do not try to draw more than 80% of the said 20 amps. This means that you should be safe using as many outlets as possible as long as you don't go over 16 amps. The extra 4 amps that is left over is used for safety. Some devices have surges and this extra 4 amps is used to handle those surges.

How can I tell how much capacity is needed?

This is generally determined by how many watts are used on each circuit. The larger the appliance, the higher the wattage which means more electricity and thus a higher amp rating will be required.

How often do you use your appliances?

Another thing to factor in when determining the amps required for a circuit or set of circuits is how often they will be used. Appliances that are regularly used may require a higher amp wire size than those that aren't used very often. Regular use of a circuit will cause more heat to be generated in the wires. This is called resistance and will cause a voltage drop in that circuit because more power is being used than what the wires can carry, so the excess energy is converted to heat.

It could be said that if all of these appliances are being used at once then you would need an even higher amp wire size because there would be a large amount of power being drawn on all circuits at this time. Generally, most homeowners will only have one or two major appliances such as air conditioners and wall furnaces installed permanently in their homes; anything else that is added later on will either be for special occasions or light use only - lamps and small electronics don't draw much amperage when compared to other devices, therefore they take very little time to cool down. If you are using a circuit for several smaller electronics or for something which is always on - such as a light fixture, then it would be better to wire that area with multiple circuits of its own so that these appliances do not diminish the performance of the other electrical systems in your home.

What is a breaker?

A breaker's purpose is to interrupt the flow of electricity in case of unwanted overloads. Breakers are used to prevent fires and shocks that can be caused by overloading a circuit.

A 20 amp breaker will have 2 pins, one is usually blue and the other white or black if it is older than 15 years old. Breakers are great since they are a second safety precaution that will allow you to have a peace of mind.

The circuit breaker has an RCD (Residual Current Device) which will detect electricity leaks and a fuse to protect against overloads. Remember that these devices are safety precautions in case something goes wrong. The RCD as well as the fuse should never be tampered with since they can be dangerous if you don't know what you're doing or even replacing them incorrectly will cause fires or shocks.

Breakers are designed so that it trips before your wiring burns out, therefore saving your house from burning down as well as preventing injuries on a painful level for you and others who might get shocked without the use of these breakers.

Houses and businesses are made safe with the inclusion of breakers and RCD's in electrical wiring. Back in the day, breakers were not included in houses and buildings since the chance of something going wrong was slim to none. But with today's world and technology, it makes sense they would be required for safety reasons.

Some basic wiring knowledge will help you out a lot when it comes to choosing the right size wire for your 20 amp circuit breaker as well as how much load each will have to take on at any given time. A rule of thumb is that if there are multiple pieces of equipment on one circuit, then you should increase the amount of amps per outlet so that everything gets enough power instead of overloading an outlet which could cause a fire or malfunction.

If you're in the market for a 20 amp breaker, this one has many great reviews from amazon.

A breaker should never be overloaded. However, if a breaker is overloaded, it will just break. There is no fire or explosion, just a breaker that needs to be replaced (and probably some repair work done). A circuit can also be overloaded by specifications, but the only reason it is overloaded in the first place is because you were trying to do something technically impossible on a 20 amp system.

The main problem with overloading a breaker or switch is that they usually won't turn off when they are overloaded and will stay on until something gets damaged. You will have to trace wires back and shut things down manually if this happens. A breaker's job is to trip when it senses a problem, but if it cannot move past the red or orange range for its trip setting then it's job is to stay on and keep hitting its switch contacts until something gets damaged.

What are some signs of overload?


Table of some appliances and their amperage

You just learned about which wire gauge to use for a 20 amp circuit. It is important that you install the correct size wire as well as understand the wiring system inside of your home in order to be safe and ensure convenience when using electricity.

It is recommended that you call an electrician if you have any questions about how much power your device requires as well as which type of wire should be used. Don't forget, it is very important to always turn off the main source of electricity before making any repairs or modifications to your circuits. As long as safety precautions are followed, then there will not be any problems with the electrical systems throughout your home.